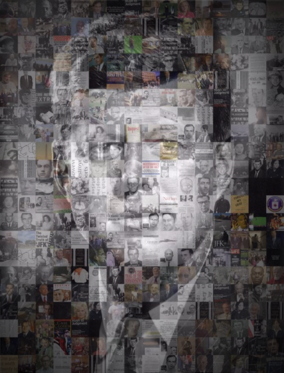 ​"Benson has created a film that every single truth seeker, journalism student, and history major should see. [His] brilliance has also made The Searchers accessible enough to inspire the average American ..." 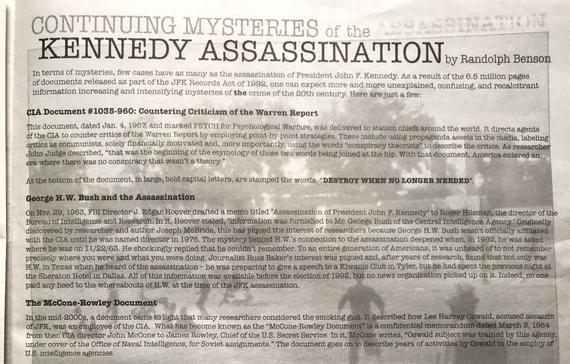 The President John F. Kennedy Assassination Records Collection Act of 1992 was signed into law by President George H. W. Bush on 26 October 1992. The law mandates that no JFK assassination records could remain classified beyond 25 years after the enactment of the act: i.e. October 26, 2017.  When the records review board wrapped on September 30, 1998, a record 6.5 million pages of documents were placed into the JFK Act Collection in the National Archives.

Under congressional order, all documents were to be released in full, completely un-redacted no later than 25 years after the passage of the JFK Records Act. That date was October 26, 2017.

However, on October 25, 2017, the CIA, the FBI and the Pentagon successfully appealed to President Trump to stop the release of an estimated 350,000 pages of documents, stating "National Security". The President extended the deadline six months, therefore all documents were due to be released in full no later than April 26, 2018.

On October 22, 2021 President Biden issued a directive re: the JFK Act documents: “In light of the agencies’ proposals for continued postponement under the statutory standard,… [documents] shall be withheld from full public disclosure until December 15, 2022.” Again, a sitting US president continues to hide the remaining documents based on National Security concerns.

However, on December 15, 2021, the Biden administration allowed the release of 1,500 pages of documents, unindexed and without a bulk download option as with previous releases.

​On October 19, 2022, the Mary Ferrell Foundation, a non-profit archive with the internet's largest collection of searchable JFK records, filed a lawsuit against President Biden and the National Archives for failing to implement the 1992 JFK Records Act. These failures have resulted in confusion, gaps in the records, over-classification, and outright denial of thousands of assassination-related files, five years after the law's deadline for full disclosure.

On December 15, 2022, the Biden administration released a statement: "Pursuant to my direction, agencies have undertaken a comprehensive effort to review the full set of almost 16,000 records that had previously been released in redacted form and determined that more than 70 percent of those records may now be released in full."  In letters to the President, the CIA, FBI, State Department and the Pentagon successfully argued for the continued suppression of 4,800 records - approximately 15,000 pages of documents relating to the assassination.

Defending the decision for the continued withholding 59 years after the assassination, Biden stated: "I temporarily certify the continued postponement of public disclosure of the redacted information in these records to provide additional time for review".

No date was given for the release of the remaining documents. ​

LEARN MORE! To see the state of the case and to read the documents for yourself, visit:​​